But why do we need our own day? And come to think of it when’s International Men’s Day? Well it’s in November actually so Deal With It.

There’s been a lot of talk recently about sexism in the beer industry (see here, here, Tand’s response to Mark’s post here, and here….oh, also here). As there should be. We should keep talking about it until it doesn’t exist anymore.

There’s also been a lot of:

‘HOW CAN YOU CARE ABOUT SEXISM IN THE BEER INDUSTRY WHEN FGM/WOMEN BEING MURDERED/VICTIMS OF DOMESTIC ABUSE/SYRIA EXISTS?!’

Well, first thing’s first: it is entirely possible to care about more than one issue at a time. For example, I care about all of those things plus sexism in the beer world PLUS HS2 being built in my front garden.

‘THERE’S NO SEXISM IN THE BEER INDUSTRY THE HEAD BREWER OF FULLERS IS A WOMAN.’

Of course, and that’s brilliant! And I can honestly say that, although I have encountered sexism in the world of beer, it’s been few and far between. But just because things are better than they were 20 years ago doesn’t mean we should sit back, accept things and not speak out. How will we ever move forward if we refuse to accept that there is still a distance to travel?

It is right to call out sexist pumpclips/beer names/clothing. It is right to speak out when a brewery/blogger/beer writer makes poor decisions in their writing/social media. It is right to name, shame and boycott brands who patronise and belittle us simply because of our gender. 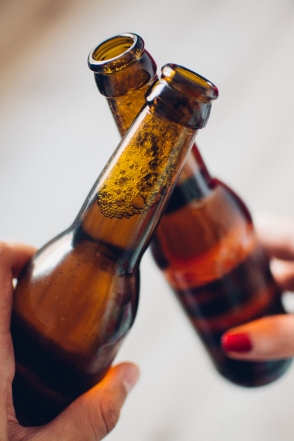 And this shouldn’t be about the fight. This is about us working together as men and women, as people, to achieve equality. I’m so tired of defending this. I’m so tired of calling people out and them telling me that I’m overreacting or apologising for me being offended by their words (which is not a real apology by the way). If I call you out, it’s not because I want a fight, it’s because I want you to look at what you’ve said or done and think ‘why is Charlie offended by this? Does she have a point?’ If I call out something that happened at a beer festival/event (for example) that you happened to be involved in, I want you to say ‘wow that’s really bad, how can we ensure this doesn’t happen again?’ rather than ‘WELL IT WASN’T MY FAULT.’

We live in a culture where sexism (and racism) are systemic, taught to us from a very young age, and we’re going to make mistakes. And that’s okay, as long as we acknowledge that.

There are some brilliant women beer writers out there and, if you haven’t already, I suggest you take a peek. Here are my favourites:

Melissa Cole | Taking the Beard out of Beer

Lucy Stevenson & Louise Mulroy | We Made a Beer

Katie | The Snap and the Hiss

Kayleigh | The Ale in Kayleigh

Kat Sewell | Have I got Brews for you

And a couple of blogs that are 50% woman:

And of course Jane Peyton, Marverine Cole, and so many journalists and broadcasters that write for all kinds of publications.

I know there will be so many missed out, so please please please suggest a few more to me! I like nothing more than beefing up my list of beer blogs (it’s perfect Sunday reading don’t you know).