For some time I have complained about the lack of good beer bars and pubs in the north west of London. Don’t get me wrong, they do exist, but not in the quantities of, well, every other part of town. So you can imagine my excitement when it turned out that not only was a new bar opening promising cask ales and craft beer, but that it was IN WALKING DISTANCE OF MY HOME. Readers, let me introduce you to The Hop & Vine Bar, the newest addition to Ruislip High Street. 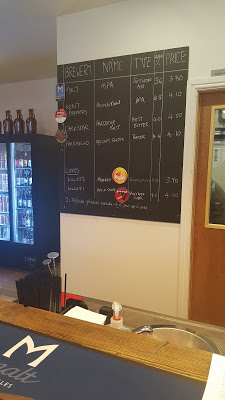 We first visited on a Sunday and, although quiet, we were pleasantly surprised to see there were punters in there (although happier to get a table, obv). There are no taps on show, but you can get a glimpse if you peek through the window behind the bar. I don’t know if that will change in future, but it certainly seems a good use of space for the moment. They had a good selection of ales on tap, a couple of ciders, and a big fridge of bottles and cans. I plumped for a half of Dark Star’s best bitter, Partridge Best which was good if a little unexciting. 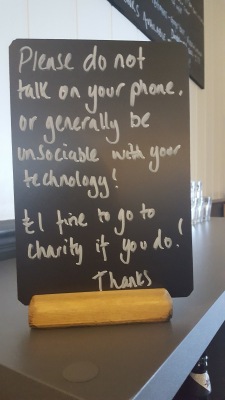 We’ve returned several times since; it’s simply a nice place to enjoy good beer and quiet conversation. Phones are frowned upon (as you can see from the sign above), there’s no music or television, just chat, board games and a hardcore posse of older men at the bar who say things like ‘Belgians don’t pour beer properly, they’re just lazy’ (this is a direct quote *bangs head on desk*).

I’m interested to see how the place develops over the coming months. I think – and understandably so – it’s a bit of everything right now: beer drinkers (CAMRAs and crafties), winos that lunch, Sunday outings with the double buggies, part bar part cafe, and I wonder if it will become more beer focused over time, especially now that they know it’s been welcomed by locals. Whatever happens, I wish them all success in the world and plan to return many, many, many times over.