Skip to content
March 10, 2014September 26, 2017 craftybeeress
It’s no secret that Wetherspoons have really stepped up when it comes to craft beer/ale. With a vast and frequently changing selection of cask ales they’ve also been adding some great bottles to the mix including Goose Island and Brew Dog’s Punk IPA.
Their most recent initiative is with Sixpoint Brewery and the result is 3 beautifully packaged craft beers: The Crisp (pilsner-style lager), Sweet Action (a kind of…cream ale?) and Bengali Tiger (IPA). Canned beers are making a come back it seems, and I can see why; they’re environmentally sound and keep the beer fresher for longer. That said, I’m not a fan of drinking directly out of a can and would always rather pour it (and when I’m given a lovely balloon/tulip glass I’d be a fool not to).
The Crisp (5.2%)

The Crisp does what it says on the tin (literally). It’s a light, crisp, refreshing, standard pilsner style lager. It’s a bit of a sunny day, BBQ beer. I could drink this lying in the paddling pool (just me?)
You’ll notice that the day gets sunnier and the photography gets better. We liked the next two so much that we returned the following day for a few more!
Sweet Action (5.4%) 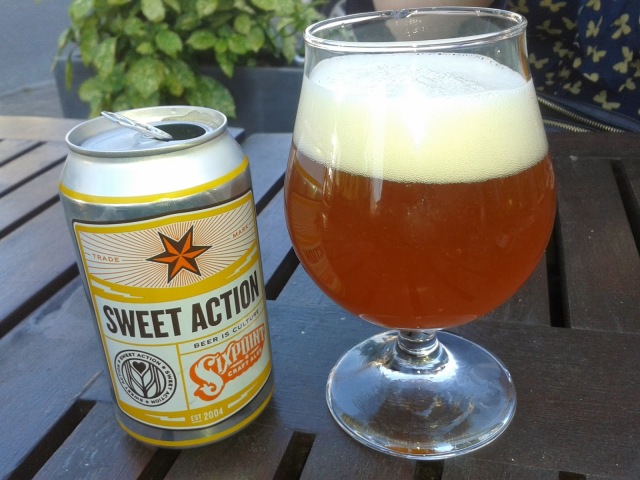 Yum yum scrum. Poured a lovely caramel amber, with a large off-white head which held very well. It’s a bit hard to describe really and not like anything I’ve ever tasted. Citrusy sweetness, creamy and with a slightly bitter finish, it’s very enjoyable.
Bengali Tiger (6.4%)

Saving the best for last here. It poured almost identically to the Sweet Action, but with a slightly deeper amber hue. The hops! The citrus! The depth of flavour! The finish is dry and bitter (right up my street). Just put me in a bath of this. At 6.4% it’s a bit dangerous but I could probably drink this all night.
Sixpoint have also collaborated with Adnams to produce a cask ale called “Make it Rain” (ho ho ho) which is also available UK wide.
I’m really impressed with Wetherspoon’s embracing craft beer in the way they have and, in cases like this, actually being ahead of the game. At my local (in the outer zones of London) they’re selling them two for a fiver which is a cracking deal and will hopefully encourage others to give them a go. Get down to the Spoons; they’re not elderly man creches any more!

2 thoughts on “J.D.Wetherspoons and Sixpoint Brewery”