Crafty Women is a new series dedicated to highlighting women within the beer industry. From hop picking to brewing to selling to writing, the world of beer is more accessible to women than it ever was before and we are killing it.

I first met Marverine during a press trip to Hall & Woodhouse earlier this year. When I heard she was coming (about 5 minutes before she actually arrived) I was a little star struck. After all this was Marverine Cole, the first woman ever to win a British Guild of Beer Writers gold award!

Although I knew about Marverine through her beer blog, Beer Beauty, her love of beer happened accidentally via her true passion; broadcast journalism. And, really, beer is such a small (but important nonetheless) part of her life when you consider everything else she is; news anchor, screenwriter, voiceover artist, university lecturer, and presenter of a fantastic podcast celebrating the lives and work of women of colour. And that’s just her professional life. When it comes to hard work, ambition and pursuing your passions, there’s no one more inspiring to me than Marverine. And on that note, I’ll hand over to her. 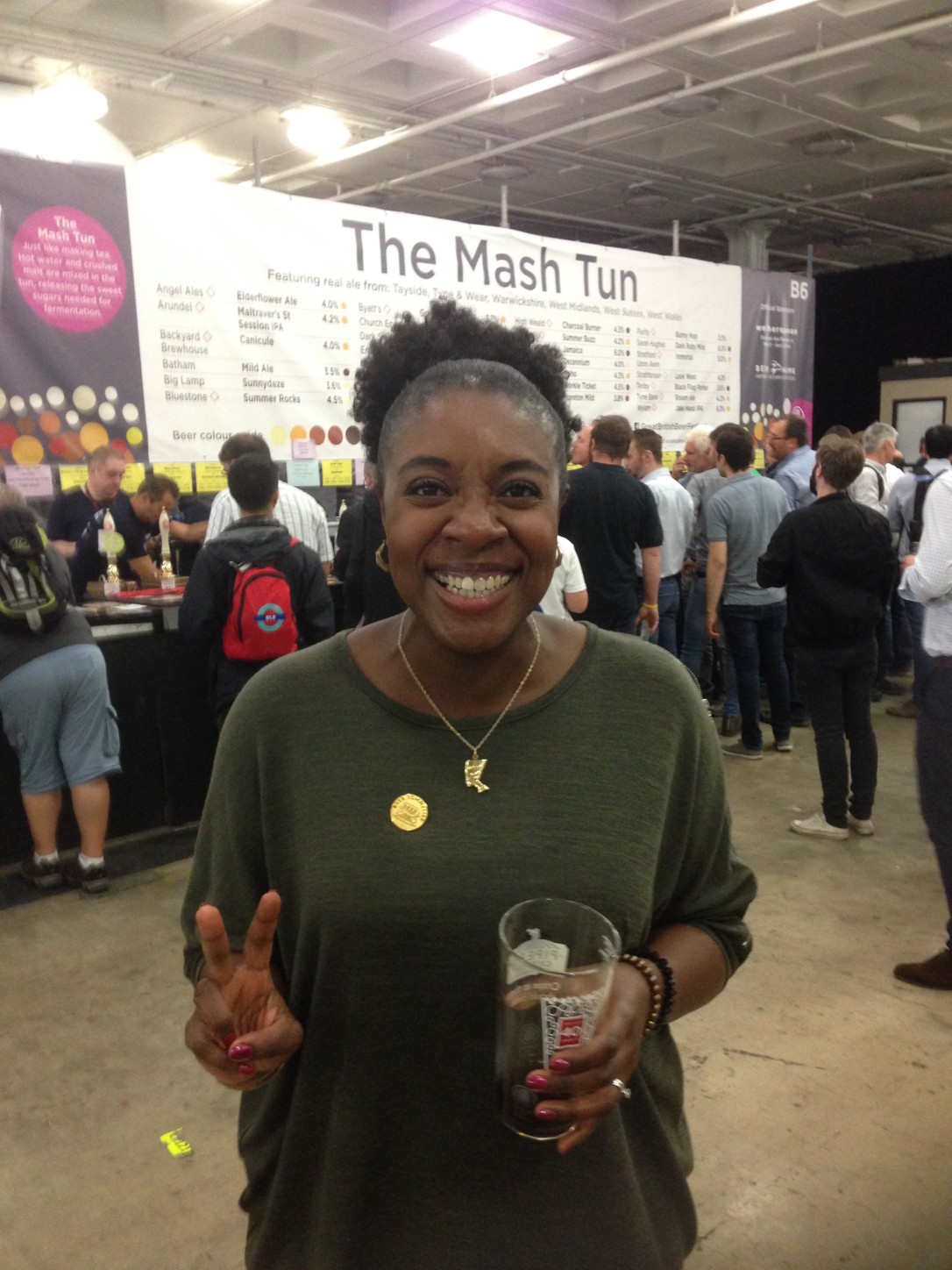 What came first – broadcasting or beer?

Broadcasting! Broadcasting is my career and I’ve been doing it for 25 years. In 1993 I started out as a volunteer DJ at Radio Lollipop (at the children’s hospital in Birmingham) – did a few other things through the years like the occasional commercial show at the weekends – but 14 years ago I went back to uni to study broadcast journalism. I’m primarily a news journalist now, mainly a reader, but sometimes a reporter for ITN. I work for 5 News and BBC Midlands Today.

Beer actually came about as part of that. When I was a freelancer I was looking for a story and I read about the figures from the Cask Ale Report (2009) saying that the number of women that regularly drank real ale had doubled and I didn’t believe it! I didn’t like beer and I didn’t like ale. I saw a story, set out to disprove the figures and ending up proving them! I produced a 10 min feature for BBC Inside Out explaining how women could be the key to the profitability of pubs by making them more female friendly; do some beer and food matching, provide suggestions on menus, get some more interesting beers in rather than just boring bitters – women come in, bring their friends, recommend it to others and sales go up!

I joined the British Guild of Beer Writers and started blogging about everything I was learning as I started to love beer. In 2010 I submitted the Inside Out feature to the BGBW awards and won the award for best broadcaster.  I was the first woman in its 25 year history to win a gold award, and got my name engraved on a silver tankard which was awesome!

This is probably a very difficult question to answer, but what does a typical day look like for you?

Have you encountered any difficulties in the beer industry as a woman and how has this developed over the years?

I have not encountered one problem. It’s funny because I expected problems but I didn’t get any. I was really welcomed with open arms!

Over the years that I’ve been into beer- and by that I mean going to BGBW awards and events, beer launches all around the country, beer festivals – I’ve mixed with a lot of other ‘beer’ people; landlords, heads of breweries, other writers and journalists, I noticed that I was the only black woman of African-Caribbean heritage in that scene – and no one batted an eyelid.

You cannot blag loving beer. Some people ask me ‘do you really like beer?’ and I’m like ‘how can you fake a love for beer?!’ because you just can’t. I think beer is like Marmite; some women love it  and some don’t, and some men love it and some don’t. And I really love beer.

Do you think the industry could do more to entice women into the world of beer?

Yeah definitely. I know a lot of breweries, mainly the big ones that do advertising on TV, that are very safe and stick with their core audience – and that core audience always seems to be men. So it’s always men having a drink together or at sporting events which are typically played and attended by men.

A few years ago Greene King had an ad campaign that was all centred around the pub and people having a laugh and it had women in it and it was great! They were just enjoying themselves, like women do, and just having some beer. They could have gone one step further; I don’t think I saw in one frame any Black or Asian people – we do exist, we do drink beer, and it would be nice to see us in beer ads. But yeah lots of brewers play safe and play towards a ‘blokey’ image when they’re advertising. They just need to show women being part of this too – there’s nothing wrong with that, it’s not going to alienate your core drinkers if you show women drinking beer.

They just need to talk to women beer writers and brewers and we’ll tell you what to do – it’s really easy!

You often speak about the invisibility of BAME women in the mainstream media and this also seems to be particularly noticeable in the world of beer. While I understand this is a much bigger issue than the beer industry, do you think there is anything we can do as beer communicators/brewers/sellers to raise awareness of this and make beer/the industry more accessible to black women and women of colour?

Like I said before, just talk to those women of colour – and women generally – who love beer and write about it, brew it, drink it, genuinely love it. Survey those women and find out what we think – or just include us! Representation is much more powerful than people think; by seeing a Black woman or Asian woman in a beer ad in amongst everyone else for more than 1 second of a frame on TV really makes a difference. We’re there so just put us in the frame! Simple. They don’t have to go ‘oh we need to make a special advert with just Black and Asian people in it (sighs heavily) No! Everyone has different friends from all different walks of life. you just need to show everyone hanging out together – that’s it.

How do you feel about the rise of “craft” beer and how has this impacted you?

I think it’s awesome! Craft beer was still a bit niche when I started writing and talking about it, and now it’s totally exploded. I was the only beer blogger in Birmingham for many years and then my day job just took over and I didn’t have time to keep doing it. Now I turn around and there are tonnes of food and beer writers all over Birmingham.

The rise of craft beer is great; there are so many pubs that are stocking better beer, that really care about their beer, and the more that do that the more that get to drink it. It’s a brilliant thing because beer is just so awesome and more people need to taste it until it becomes embedded in our psyche – like wine is the first choice for a lot of people – beer should be too.

The northern beer scene has boomed in the last couple of years – do you think Brum is the Next Big Thing?

Yeah definitely. When I started out Leeds, Sheffield and Huddersfield were big. Leeds got a brilliant bunch of pubs and, to be honest, Birmingham was quite a wasteland. Now you’ve got The Wellington, The Prince of Wales in Moseley, Clink, Stirchley Wines, Cotteridge, and new breweries have sprung up.

One of my first beer parties for women was with Purity, in the West Midlands. It was them and Two Towers Ale, and they were the 2 main brewers out there. Now – wow – you’ve got Birmingham Brew Co, Glasshouse Beer Co making the most incredible beers. There’s a little scene happening here and it’s bubbling away very nicely.

What has been your proudest achievement in your career?

When I became a journalist I always knew that I wanted to anchor an international news channel, so reaching Sky News and being a presenter of world news and business is the biggest achievement of my career. Solo anchoring rolling news for 5 hours is terrifying, but exhilarating and exciting. Some terrible things have happened on my shift, like the earthquake in L’Aquila, but some awesome things too like Barack Obama’s nomination and then his inauguration, and the Beijing Olympics.

What is your favourite beer of all time?

Oh my god. That is the toughest question in the world. Oh god.

I don’t have one! Can I give you a Top 3? They all taste quite similar, but they’re all incredible and I’ll always have them if I see them on draught – they’re all real ales.

I love Oakham Ales Green Devil IPA; it’s quite strong, but gorgeous. The aroma is heady, sweet and strong. Another that is quite similar – a beer that has won so many awards – is Jaipur by Thornbridge. It’s the most outstanding beer. It has a similar tropical fruit profile and is just beautiful. Not a starter beer, I’d recommend working your way up to it if you’re just starting out.

A lovely darker beer that I like is ESB by Fullers – an incredible beer! Damsony, raisiny, a sweetness and richness – a Christmas fruit cake in a glass. I would have that beer with a steak…chips…flat mushrooms…mmm.

At that point I assume she popped her coat on and went straight down the pub (well I did anyway)! I’d like to send a huge thank you to Marverine for being my third Crafty Woman, and for putting my transcribing skills to the test.