City Cruises and Gipsy Hill Brewing Company are delighted to invite beer enthusiasts to experience a night like no other on the river Thames, Thursday 16th November.

Guests will have the chance to sample four different craft beers during a one-off evening of beer tasting and discovery, all whilst soaking in the incredible views of London by night from the river Thames.

By partnering with Gipsy Hill, a south London-based brewery producing full-flavoured, medium-strength craft beer since mid-2014, City Cruises want to strengthen their commitment to bring traditional, London-made experiences to their guests, whilst sailing on the iconic Thames.

The first half of the cruise features an interactive beer talk delivered by the Gipsy Hill staff, followed by craft beer sampling. Guests will learn about an exclusive English IPA being brewed on board the vessel they will be travelling on.

The boat will be carrying two hand-made wooden barrels holding a traditional English IPA from the south London brewery. The motion of the waves combined with the delicious hops will create a craft beer sensation sure to tantalise the taste buds of beer experts and novices alike. Dating back to the 1700s, India Pale Ale (IPA) was once brewed in wooden barrels stowed on vessels that sailed from England to India, taking 3 – 4 months each time. 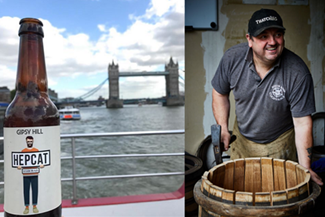 This autumn, every guest boarding the sightseeing cruises will have the opportunity to see the wooden barrels on them, specifically created by the last master cooper Alastair David Simms, who began his career in 1979.

For the second half of the cruise, guests can relax with a Gipsy Hill beer included in the ticket price, and view the stunning vistas of night-time central London from the open upper deck, or from the heated saloon area.

Over 18s only. For more information visit www.citycruises.com/special-events/craft-beer-cruise-london