Last month I was kindly invited to a Meet the Brewer evening at ‘SMITHS’ of Smithfield. And the brewers I was to meet? Orbit Beers. Home of the musically inspired brew (but, you know, actually inspired by music rather than this gimmicky nonsense).

I’d not been to the craft beer bar at ‘SMITHS’ before, but it’s a well designed spot, full of light with exposed brickwork, comfortable seating and an excellent selection over more than 70 beers, with a focus on London based brewers. If you’re that way I’d recommend a visit (Crafty Tip™ – grab a window seat, sip a cold one and gaze out over the market).

The history of the brewery is an interesting tale of a journey many of us have probably thought about taking ourselves; inspired by Raw Spirit, the telling of Iain Banks’ search for the perfect dram, Robert Middleton hopped into his VW campervan and went to every brewery in Scotland on a quest for knowledge and inspiration. On his return in 2014 he found the perfect space for the brewery – a railway arch in Kennington (naturally), the perfect brewer – Mario Canestrelli, and embarked on brewing some excellent beer, inspired by his musical influences.

The team took us through the 4 core beers in the range: Ivo (pale ale), Neu (altbier), Nico (kolsch) and Peel (a Belgian inspired blonde ale). I’m rather a fan of Peel, its lemony peppery notes make it a good companion for food, particularly fish, but I can honestly say there is nothing in the range that I haven’t had more than once – it’s a solid offering.

The eagle eyed and melodically smart among you will have spied a musical connection in the names of these beers – and indeed there is! But I won’t ruin it for the rest of you (although if you hadn’t guessed the Peel connection I’d probably just Google it).

Orbit also have their White Label series, a collection of experimental one-off brews. They’re currently up to #10, a Double Extra Belgian Pale, but #11 is on the way and promises to be a summer saison ‘loaded with elderflower’.

I was going to comment on Orbit’s branding, but just the other day they announced a rebrand which will completely change the look of, well, everything. The official launch is on Saturday 1st July at the brewery to coincide with their 3rd birthday party, but keep watching their Twitter feed for teasers (this is an exciting one).
_ 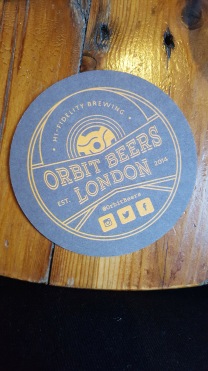 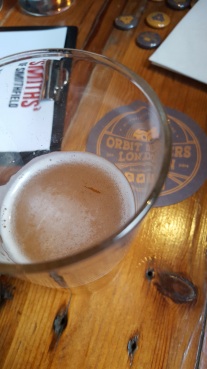 ‘SMITHS’ have lots more in the pipeline so keep an eye on their events page for more Meet the Brewers – they’re free, they’re fun, and you might just discover a beer that’ll change your life (or the capacity of your fridge, at least).