Skip to content
October 8, 2015September 26, 2017 craftybeeress
You might remember that, earlier this year, I attended a German beer tasting as part of London Beer Week. It was led by Boris Warneke, originally from Germany but now residing in Bristol. He had big plans, both to brew his own beer and to start importing and selling German beers through his online shop, Bierhaus.
It’s more than 6 months later now, Bierhaus is trading and Boris’s own beer range, Alpenwald, is available in Bristol and Cardiff. As the UK is spending the month celebrating Oktoberfest (late, as per) I thought it would be the perfect opportunity to catch up with Boris and ask him a few questions…
Hi, Boris! Can you tell me what inspired you to start up Bierhaus?
I was inspired for Bierhaus while I was here in the UK and missed my beers I was used to. As I was looking for them I felt a lack of getting those beers. It was difficult to find the selection I had in mind as to find the local brew also means to find the non-export versions. I realized that some of the German beers were not brewed in Germany and are even pasteurized for a longer shelf life. Those export versions have in my eyes a critical different taste and are not the ones I wanted and was looking for.
I solved this problem in that whenever I was going back to Germany by car (and in the beginning I needed to go back every month) to take a crate of beer with me to England. During my stay my new English friends here in Bristol were getting curious about my beers brought from Germany and they told me the beers are lush! They said, whenever I am going again to Germany could I please bring them a crate, too. I smiled and of course I brought another one for them. Very soon later, one asked me to bring a crate for a friend of his because he liked it so much.
I realized this upcoming demand and asked my friends if they thought I could sell those beers in Bristol and if there was a market for it. They said yes and so I started to look a bit more seriously at it. I asked at pubs around, tried to understand the necessary paperwork and licences and, last but not least, to find a reasonable transport and storage. I wouldn’t had started it if those friends had spontaneously answered No! 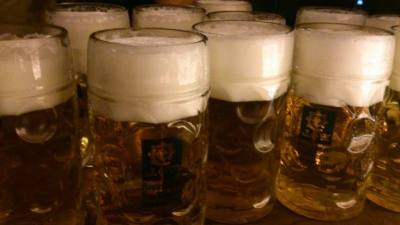 How do you select the beers that are available on Bierhaus?

To be sure which were the right beers to go with, I used my beer liking friends to help me to find the right tastes to start with in the UK. I preselected my personal favourites (so far they liked them, otherwise they hadn’t asked me to bring more crates) extended it to a range to cover all common beer styles, brought 3-4 different items each style and collected the feedback. The result was my first list of well selected German beers, from where I started selling.
It is still the same system I use for new beers: trying those out with my selected beer lovers and, if they like it, it comes to the list. That is the only way to enter my Bierhaus list.
Could you tell me a bit about Alpenwald, what inspired it and where it can be found on draught in Bristol? 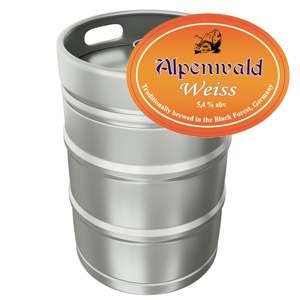 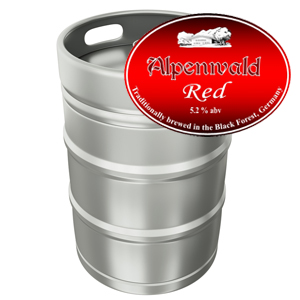 During my selling of German labels and fine beers I was often asked for my own favourite beer and why I was not doing my own beer. Further more I also wanted to give an answer for the beers which are on a permanent beer line at the pub; with a very good quality and reasonable price! Putting both together my favourite beer taste, produced with quality ingredients to a high level product, and being able to offer it at a competitive price, I decided to make Alpenwald. Alpen means alps and reflects the clear water. Wald means forest and reflects the fresh, green ingredients used for the beer. I let the beer brew in the Black Forest, Germany and bring it to the UK exclusively. 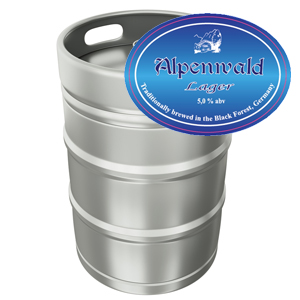 Meanwhile the beer becomes more popular and I offer four different styles in my own glassware. Available are the Black Forest Lager (Alpenwald Lager), Weiss, Red and a Brewer’s Reserve, which is a cloudy, hoppy lager. You can find Alpenwald in Bristol at:

The Beer Emporium, The Lanes, The Green Man, The Crofters Rights and from time to time at The Love Inn, Small Bar, Bag of Nails and 3 Tuns.

You can also find it in Cardiff at The Hopbunker, Gloucester at The Tank, Gloucestershire at The Stagecoach, and Dover at The Eagle Hotel.

Are you doing any more events or tastings?

I haven’t planned any tastings at the moment. A nice upcoming event will be the Octoberfest at The Chapter in Cardiff. I supply this venue for the 4-days festival with 25 different German beers on draught. They just wanted to have the rare and fancy ones and selected very carefully. I think it is worth it to go to. Also I started to sell real German sausages, which are made in Bavaria in a very small town. They are authentic and really delicious. Those sausages are also available at Chapter’s Octoberfest.

Check out http://www.bierhaus-online.co.uk/ if you’re into the cold, German, hoppy stuff. It is October, after all.