The Black Isle is a beautiful place. Surrounded by water on three sides, it is in fact a peninsula rather than an island. Covered in rolling fields and wild woodlands, you can stand on one of its many beaches on a sunny day (yes, it is sunny occasionally) and watch the dolphins or look up into the sky and spot a Red Kite. It’s certainly not hard to see why David Gladwin, founder of the Black Isle Brewery, chose to set up shop here in 1998, but I ask anyway. ‘The Black Isle is our home, but it also has a 225 year old tradition of growing quality malting barley for brewing and distilling,’ explains David. ‘In the first statistical account of 1790 it particularly mentions our home, Old Allangrange, as the best farm in the area for malting barley’.

The Black Isle Brewery is tucked away at the end of a dirt track road that will test your car’s suspension, but once you’ve pulled into the driveway you can see this is the real deal. Indeed, it’s hard to believe that this started as a ‘bucket in a shed’; the brewery now spans several large buildings and can brew up to 10,000 litres a day. But what was their motivation for starting at all? ‘I started the brewery to make some really good beer first and foremost’ says David, ‘but to try to do it using organic malt and hops. Since then we have managed to buy the farm and convert it to organic production and we are well on the way to creating an organic beer brand’. This fierce commitment to using organic products is what sets the Black Isle Brewery apart from other craft breweries, their beer is made completely without chemicals, as nature intended, and their slogan is ‘Save the Planet, Drink Organic!’

All the malt and barley used at the brewery is grown on their organic farm. Molly the cow also lives here and provides twenty pints of milk for the farm each day, for which she is rewarded by being given first dibs on the malt from the brewery mash tun. ‘It’s even in the coffee we’re drinking now!’ he emphasises. Of course, their dedication to producing organic beer does come at a price. They pay 3 times as much for their hops and twice as much for their barley, but they believe that price is worth it for the end result. ‘We want people to know that they might pay an extra 5 or 10 pence with us,’ says David, ‘but for that they’re getting a premium, organic product.’ 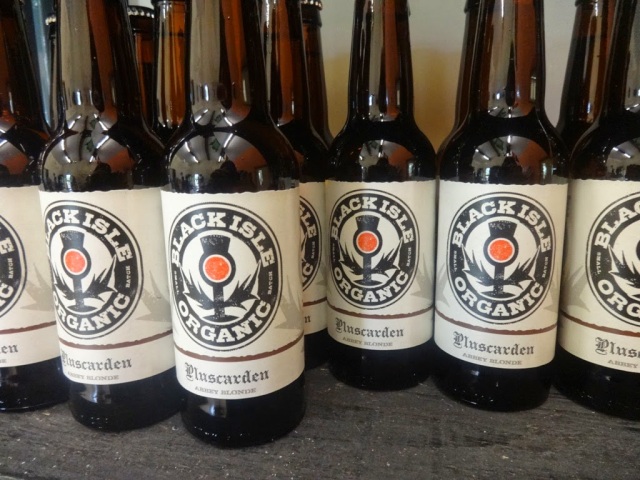 And not just an organic product, an exciting one at that. One thing you can’t say is that the Black Isle Brewery isn’t pushing boundaries and getting experimental with their brews. Current highlights include Pluscarden Abbey Blonde, a Belgian inspired blonde brewed with the assistance of Scottish monks and The Black Run, an imperial stout aged in a Tomatin Whisky Cask (the Bourbon Cask Edition was out of this world, but is currently unavailable). In the pipeline is a saison and an oak aged red rye.

As if that wasn’t enough to keep them busy, they also launched Jocktoberfest in 2011, a now annual festival that celebrates ‘beer, bands and bratwurst’ with revellers camping on the farmland. Each year they brew special one-off beers for the occasion, which is surely worth the journey alone.

Given that they launched in 1998, the Black Isle Brewery is really a veteran of craft beer in the United Kingdom, but why do they think it has exploded in popularity in the way it has? ‘Craft beer has taken off because of certain individuals passions and interests to brew different beers that have obviously appealed to so many people,’ says David. ‘There are people drinking beer now that would never have in the past and the vast array of different styles offers a fantastic choice . People who care about what they eat and drink were fed up of the generic global brands of boring dishwater so the time was right. But it takes a few inspired, mad, brave individuals with imagination and balls to get it started and rest happens.’ Well, if a little bit of madness can result in beer this good, I say bring on the madness!

This was first published in May 2014 on another website, which is now no more, but I would like to keep my scribblings available to anyone who fancies reading them, hence republishing on my own blog.