Skip to content
January 9, 2015September 26, 2017 craftybeeress
It’s 2015! Yeah! I’ve decided to leave off the 2014 round up/2015 hopes, dreams and fears post because…well, that’s not very me, but something I would like to attempt to do more is be more creative with my cookery attempts and, where possible, include a little beeriness.
My journey into the world of cookery has commenced and with varying degrees of success. The lows? A victoria sponge so flat it was mistaken for a pancake. The highs? Well, this dish I’m about to show you which has officially been crowned ‘The Best Dish I’ve Ever Cooked’ (admittedly, it wasn’t a difficult title to attain).

Carbonnade is a Belgian stew, traditionally made with beef, onions and beer. It should have a slightly sour flavour which influences the choice of beer used, usually a Belgian red ale. I tweaked this recipe slightly to suit my tastes, but if you are looking for that traditional flavour I’d recommend using a Rodenbach (or-like me-drink a Rodenbach while cooking).

Ingredients (enough for 2 greedy people):
500g diced braising steak
1 carrot
1 parsnip
1 onion
1 clove of garlic
1 tin of chopped tomatoes
400ml beef stock
1 bottle of Westmalle Dubbel
1. Warm a couple of tablespoons of oil in the pan and sear the meat. Once this is done, remove the meat from the pan and pop into your casserole dish.
2. Put the diced vegetables into the pan the meat was in and glaze (basically, stir fry them for around 3-4 minutes).
3. Pour the beer over the vegetables and prepare for the sizzle! Then pour it all into the casserole dish with the meat. 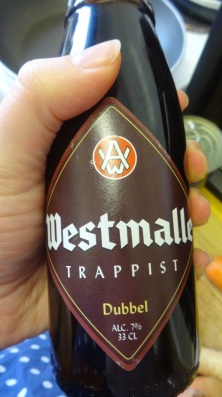 4. Pour your tin of chopped tomatoes and beef stock into the casserole dish. Give it a little stir.
5. Preheat the oven to 200°C (180°C fan oven) and cook for around 2 ½ hours or until the meat is tender and the sauce has reduced.
6. Serve with crusty bread and a big, tasty Belgian.

Uh oh, you tried to put in a can of Carlsberg and it tastes terrible. Don’t worry! If you’re in London you can get down to The Dovetail in Farringdon (shameless plug for one of my favourite places) and try their Flemish Stew which, by the way, tastes amazing AND comes with mustard toast.
This was first published on another website, which is now no more, but I would like to keep my scribblings available to anyone who fancies reading them, hence republishing on my own blog.