Skip to content
September 17, 2014September 26, 2017 craftybeeress
Thanks to my incredibly busy social life (ahem) I don’t always have time to get along to every beer festival. Luckily, I have minions who drink beer on my behalf. Guest blogging for me today is John Worthington; designer at large… 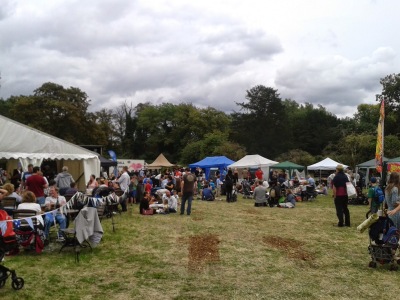 It’s been a busy month for beer festivals. After visits to the cavernous GBBF and the ever-reliable Meantime Brewfest I was starting to crave a slightly more relaxed weekend. So it was with some weariness (and a beast of a Saturday morning hangover) that I took the Northern line all the way to Morden for Sambrooks second annual Beer by the River event.
Taking place in the vast Morden Park, BBTR instantly stood out from many of the other London festivals thanks to its rural surroundings. Deep in the park it was easy to forget that I was still in the capital, the marquee tent and kids bouncy castle suggested more a of country show than a trendy London beer festival. This accessibility is something that Sambrooks deserve to be commended for; it was great to see so many families (including grandparents and children) enjoying a day out together. There was also a healthy selection of food stalls, live music and guest speakers on the stage. So far, so many boxes ticked.
Situated in the marquee, the bar ran on a beer token system, which by the time I arrived was trading on raffle tickets and post-it notes. Prices were reasonable though and with a healthy selection from the likes of By The Horns, Hop Stuff, Hogs Back, Westerham and of course, Sambrooks, I was keen to get wired into some hair of the dog.

First up was this smooth and creamy bitter. The nose was bready (hot buttered toast?) with a malty, nutty taste and a mild underlying sweetness. Very well made overall, this was the perfect beer to start the day and send the hangover packing.


By the Horns Lambeth Walk Porter 5.1%

This is one I’d tried before but I really can’t resist a Porter. Lambeth Walk had creamy cappuccino on the nose, with the taste delivering a hit of caramel sweetness, followed by milk chocolate and a mild, bitter smokiness. Creamy and rich yet surprisingly light – I can see myself coming back for more in the not too distant future.
Sambrooks Battersea IPA 6.2% (cask) 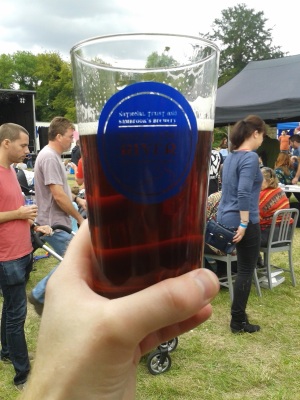 This came recommended by a member of the bar staff who told me that it might be the last chance I’d have to taste it from a cask. I didn’t need to be told twice. The nose was pleasant enough with sweet brown sugar but the taste was mindblowing – after initial malty and woody flavours came a massive hit of citrus fruits and mango by the cartload. At 6.2% this was fairly powerful stuff but I could have happily seen off a few more pints if I didn’t have notes to write!

Sambrooks Battersea Rye 6.2% (cask) After the IPA I was expecting a similar level of quality but this one didn’t really deliver for me. There were some enjoyable notes of antique furniture and walnuts on the nose, but otherwise I felt that this had a particularly thin body and lacked a defining character. Shame because both of my other Sambrooks experiences so far had been excellent.
Westerham Hop Rocket 4.8% Moving on to something with a slightly lower abv felt like a smart move after the last two and this mild bodied IPA helped to level things out a bit. With cloves on the nose and much more of a hoppy, flavoursome taste than I had initially expected, this didn’t disappoint and delivered more taste than I expected for the abv. Not bad at all but not quite as good as…
Hop Stuff Renegade IPA 5.6%

Definitely the best beer of the day. The nose was floral and sweet, all well and good. However, the taste was an unexpected storm of fruit juice (Um Bongo anyone?) dark caramel and Seville orange marmalade.  Intensely sweet and the perfect beer to finish off a great day out.
Overall I think Sambrooks have done extremely well with Beer By The River. The friendly and relaxed atmosphere coupled with the comprehensive (but not overwhelming) selection of beers all added up to a really refreshing beer festival experience. If I have any complaints, they would be that the bar seemed slightly understaffed at times and the token system could have been better organised. These are minor points though and take nothing away from what was otherwise a great day out. See you next year, Sambrooks!